It was Black Irish’s first online e-book giveaway and provided valuable lessons that will be incorporated into future giveaways and promotions.

As usual, we’re sharing what we learned here, with hope that some of it will be of interest/help to you.

First Up: The Pricing and the Format

Black Irish wanted to thank readers for their support since its launch in Summer 2012.

In the beginning, we made the decision to avoid discounting. We’ll do our best to offer the best pricing available all of the time, with giveaways rather than discounts offered from time to time.

Because of the delays in shipping this time of year, and because the cost of shipping has increased, we decided to offer an e-book. E-book downloads offer immediate access and the shipping isn’t cost-prohibitive.

“Engaging” is the buzzword today when it comes to writing e-mails—paired with the reminder that the recipients are human and want something of interest, rather than a cold, robo-sell.

We agree, but the other side of remembering that the recipients are human is that humans make mistakes and we each bring different experiences and knowledge to what we read, which in turn influences reading comprehension. The message I take away from an e-mail might not be the same one taken away by another reader.

The following is the e-mail that went out to First Access Members and previous Black Irish customers.

When I look at the e-mail now, my eye goes from the headline to the discount code, and then I scan up to the “special holiday sales page” in blue. I don’t even read the 1-3 numbered instructions. I highlight and copy the code and click on the link, and am on my way.

In hindsight I would have bulleted, tightened and put the 1-3 numbered instructions in a different color to encourage readers to scan through them, too.

I would have added information about the code being unique to each reader, too. A few people shared it with friends and then we received e-mails about codes not working. Each code was good for a one-time use. 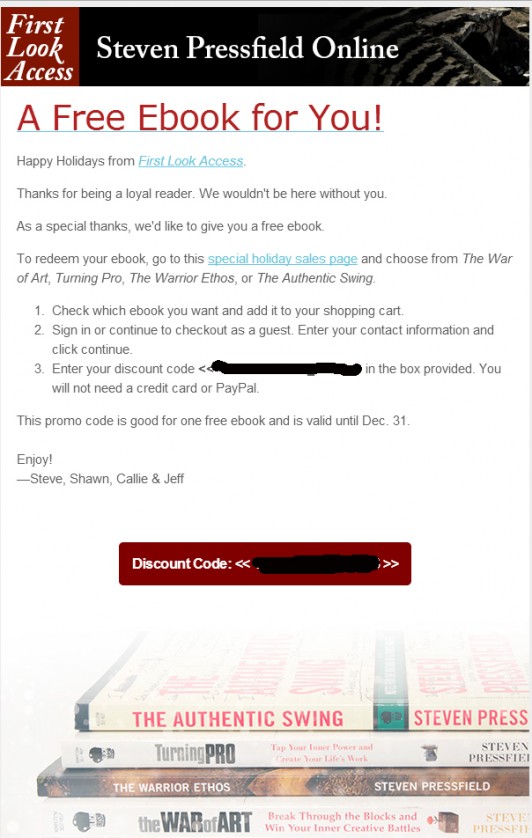 Out of the thousands of readers sent the e-mail, we received about two dozen e-mails from readers who didn’t understand that they would have to log-in and three that entered their credit card info. and ended up being charged. We refunded all three of the charges and worked with the others to access the download. 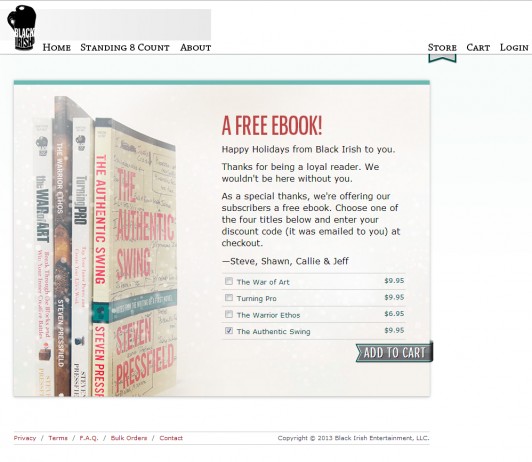 After clicking on the holiday sales page, choosing a book and clicking “add to cart” the following screen came up. The side notes include information on inserting the discount code and how the files will be provided.

We continue to receive e-mails from customers who are surprised that their audio files, as one example,  are provided via zip files, which still aren’t native to some devices, without the use of an app for opening.

During the giveaway, there were readers who reached this page and didn’t see the note about the coupon either.

We can’t make readers focus on every word on the page, but simple things such as changing up the color should help bring their eyes to the notes section in the future. It might seem like overkill, but by doing our best to highlight this information in advance, we should be able minimize post-purchase questions. Readers will know what and how they’re receiving their files. At that point, we can only hope they know the abilities and limitations of their reading devices. 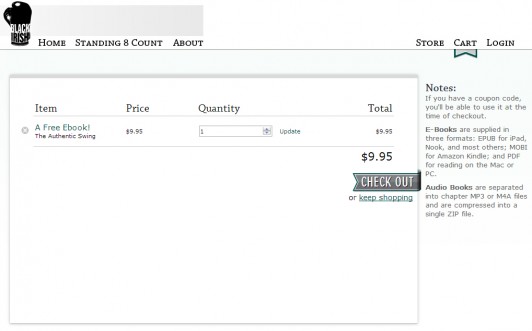 After clicking “check out” in the above, the billing contact information page below appeared. It’s a standard page, requesting contact information in advance of billing information. With this page, though, there’s also a one-click PayPal option. At least one person thought he had to click on that option because he usually uses PayPal. For this reason, he became stuck on this page. We’re dealing with a list in the thousands, but for those with larger mailing lists, it’s possible that you’ll have a few dozen or more stuck in the same way. It’s understandable, so it’s something to consider. Removing the PayPal button from this page and keeping it on the billing page, which comes up next, would be a better way to go. It keeps all of the payment options on one page. 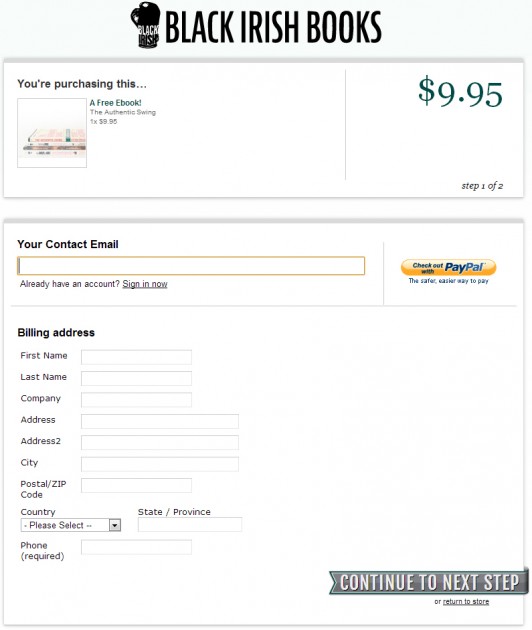 The page below is the billing page, which came up after clicking on “continue to next step” in the above. 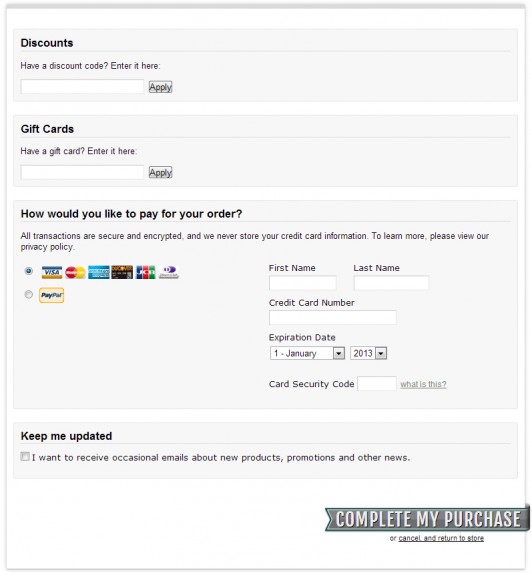 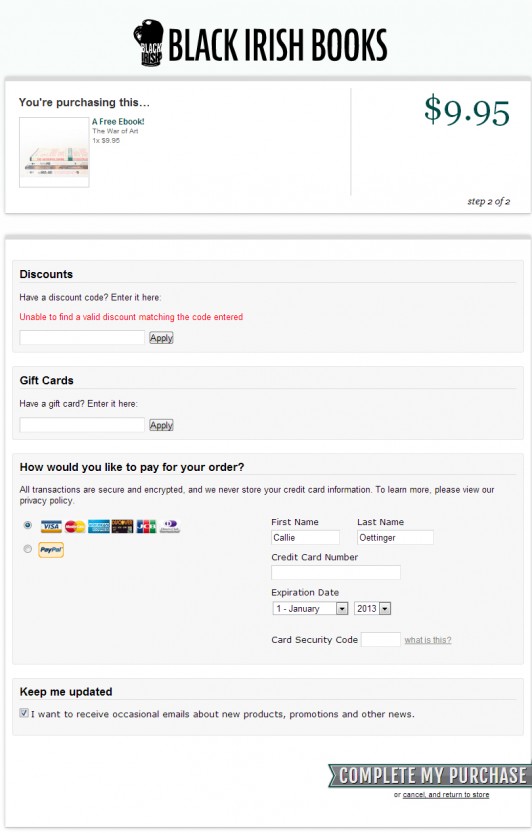 Drawing attention to the “apply” button is something else to consider, to ensure that the codes are applied in the future. We’re guessing that with the three people that were charged, this is what happened. A small number, but end of day zero charged would have been the preference.

For the codes that were accepted, the following came up next. Note the zero sum balance at the top. 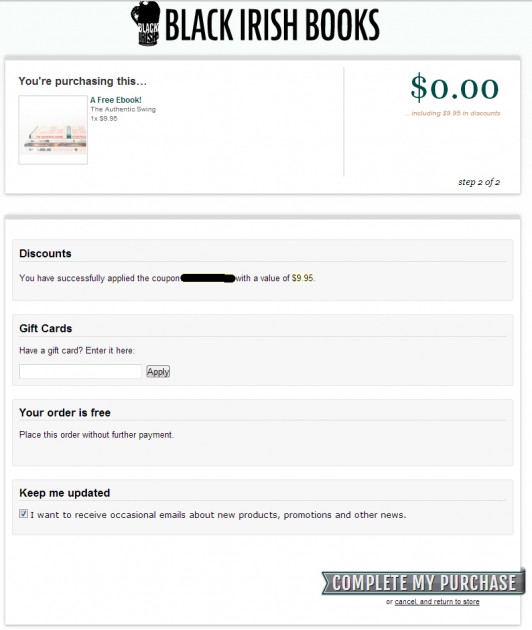 Clicking “complete my purchase” in the above was the last step toward the confirmation page below. 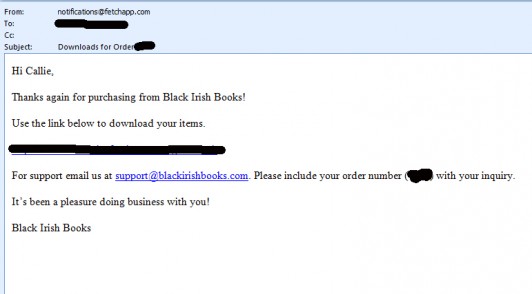 The second e-mail provided a link to the download. After clicking on the link in the above, the following screen opened.

For this screen, the zip file option looks like the buttons that are required to move from one page to the next within the order process, so changing its format is something to consider in the future.  Readers scan and something that looks like a button that’s used to go from one page to the next is easy to miss – even if it does state a clear purpose via the wording within it.

The note about which devices can open zip files is useful, but my gut is that it is lost on those that don’t know the limitations of their own devices. The assumption is often that all devices are able to open all files, so including those that can’t open, or need an app to open, zip files is something to consider in the future. 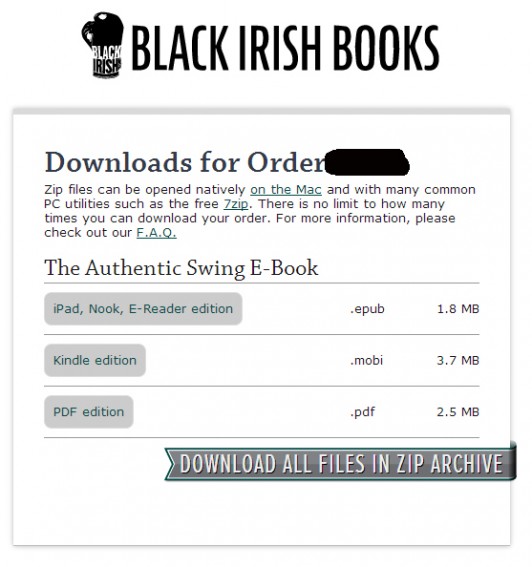 To date, 10,501 e-mails have been sent. The e-mail was opened 4,969 times. Note that this includes multiple opens per person. It doesn’t indicate that 4,969 e-mails were opened or that 4,969 people opened e-mails. A few people were on both lists (something else we need to watch for in the future).  The link to the special giveaway page was clicked 2,563 times. There have been 869 orders completed and 1,817 downloads completed, indicating that the ebooks were downloaded multiple times for the same order. A few hundred readers signed up for First Access after the offer was announced. Between now and the offer’s end, on December 31, anyone signing up for First Access will receive the free ebook e-mail offer, too.

The majority of the responses we received were positive. There were a few people who sent e-mails about being frustrated with the process. Then there was this one other e-mail:

Though online commerce isn’t new, what we consider a given – as intuitive – in the process isn’t always such.

And, though reading/viewing devices aren’t new either, many don’t know how to use their devices—nor do they know the limitations of their devices. Kindle users need help uploading non-Amazon purchases, as do Apple users, who aren’t buying from the iTunes store.

In the end, I did send one reader to Amazon to troubleshoot with the Kindle team because I’m not an expert at troubleshooting Kindle devices. The files worked and were sent twice, which indicates there’s a possible issue with the device or the process being followed to upload the files.

For the future, we’ll continue to improve the process, make the steps simple and easy to understand, and anticipate areas that might cause readers frustration (and proactively eliminate them).

***If you read this and recognize yourself as one of the readers described… Though we hated that things weren’t streamlined for you, know that you offered us valuable lessons and none of the above is a criticism of you.