I didn’t like Uwem Akpan’s Say You’re One of Them when I first read it, yet some five years later, his short stories still drift into my head. 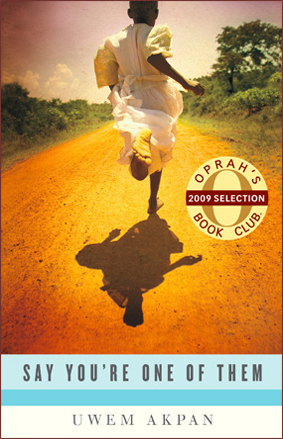 They arrive with Sadness and Inspiration and, in their wake, leave me struggling with the reality of the fiction.

In 2006 I helped share the documentary The War Tapes.

After watching a screener I sent him, a long-retired veteran relayed his plans to share the film with others.

Without pause, he said:

I didn’t say I liked it. We need to learn from it.

In the years that followed, like grew with Facebook, as a popular way to nod our heads toward a book, an article, a movie, a quote, a picture, and so on – thus making like a stand-in for hate, love, amazing, tragic, astonishing, silly, wonderful, moronic, intolerable, and numerous other descriptives.

With Facebook’s watering down of like and the comments of the veteran in mind, my response to “Did you like it?” today often arrives in two parts.

The first part addresses the craft.

I admire Uwem Aspan’s writing in Say You’re One of Them. Relentless. Honest. Well-crafted. Brave.

The second part addresses the story itself.

So did I like Uwem Akpan’s Say You’re One of Them? No.

I go back to the comment “I didn’t say I liked it. We need to learn from it.” It came with an open mind, a willingness to go beyond like. That open mind is what I try to maintain when I read and what I strive to reach when I share. It doesn’t have to like. I just do everything possible to keep it open to learn.